Freedom of movement is a human right.

The project was initiated in in the historical East German city of Dresden, but the founders are from everywhere. We stand for general freedom of movement for all. Our aim is to dissolve artificially constructed borders. With our political Art Project “Circus without Borders” we want to draw attention to the absurdity of postcolonial borders, resulting in European privileges, denounce the discrimination taking place in the state system, and demand a passport that identifies every inhabitant of the world with the same rights.

Together with other citizens of the world we are developing an interactive theatrical concept (inspired by the Theater of the Oppressed and the Theater of the Absurd) aimed at alerting the world population to the injustice of borders, to the inhuman conditions in refugee camps, to the inequality of the value of non-European nationalities and to the violation of human rights in the procedures of deportations. The concept remains open to individual change, including adaptability to local political issues and native language translation. It can be implemented in the form of improvisational theater workshops, plays, pantomime, circus numbers and provocative flash mobs. The Flash Mobs video clips will allow us to spread the topic on social media and motivate others to be part of the hashtag #FreedomOfMovement or #LiberecoDeMovado (in Esperanto).

The most important content of our initiative is a joint movement, a March starting in Dresden end of March 2018, along the Mediterranean escape routes. Ideally the essence of the movement and the theme of the theater concept will travel with us (we will collaborate with theatrical / circus groups along the way) and will also spread around the world with the help of postcards. Anyone can join or participate in projects: actors, artisans, circus performers, musicians, social workers, students, retirees and other human rights activists may use their own abilities to organize their own theme-related events or to create shows that they can present at different times of the march to express freedom of movement.

Finally, with petitions, we will address politicians at national and European level and make our political demand, requesting a change in the laws that restrict the issuance of visas. 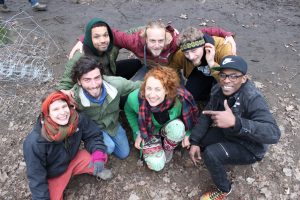